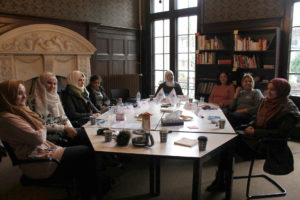 Saiedet Souria Organization is pleased to invite you to attend a storytelling evening at its office in Berlin (Ulmenalle 35). Syrian women will read their own texts from “Isthmus between two worlds,” a collection of short stories written by Syrian women  in which they describe their experiences in Syria, their often difficult journeys to Europe,  and their persistent attempts to find a foothold in the European landscape of coexistence and integration. The stories (written in Arabic and German) were produced during workshops as part of the “Revealing Women” project executed by Saiedet Souria in 2017 in Berlin.
“Revealing Women” was initiated by Saiedet Souria in 2015. Since then, more than 200 women (in Syria and the neighboring countries as well as Germany) were coached in short story writing. The participants produced hundreds of texts on topics such as fighting oppression, tyranny, and extremism; putting end to the war; and building peace. The texts also focus on activating women’s role in public, administrative, and political life; changing the stereotypical image of Syrian women; and combating all forms of discrimination exercised against women. Saiedet Souria is currently re-launching a new phase of the project at its office in the Ulmenallee 35.